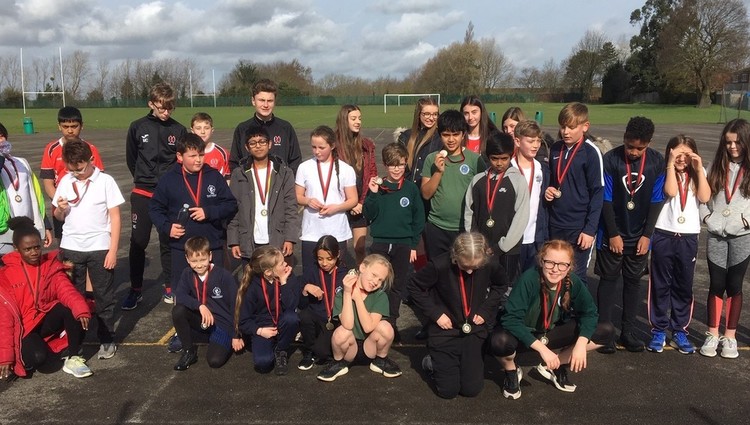 Posted on: Mar 25th 2019
Share this article
Email this page

Ten widths of a swimming pool, five laps of a playground on a bike and a run around a school field saw pupils become triathletes.

Pupils from primary schools within the BMAT group of schools in Harlow competed for the third year in a triathlon.

More than 20 pupils – the highest number of competitors to date – all completed the gruelling course at Burnt Mill Academy.

Phil Dawes, BMAT director of sport, said: “This is something different for our pupils to get involved in.

“We are keen to promote cycling more and to get them taking part in something competitive around cycling is nice.

“We have also got a swimming pool, so why not use it in this way.”

‼️TENDER OPPORTUNITY‼️ BMAT Education are inviting tenders for LED Lighting installation💡 For full details and tender pack please visit https://t.co/Qw7TwEVYui https://t.co/UAmWSFYhH3
📢 We're Hiring! @bmatsfg (Harlow) have a vacancy for a Catering Assistant 📄 For a job description and application details, please visit our website https://t.co/nhOgAiP9kh
Retweeted from @BMATSTEM
Sam in Year 13 has designed, 3D printed and programmed a hand that responds to input from a web cam for one of his engineering projects. Amazing job Sam! @BMAT_Trust @NewsHarlow @UTColleges @STEMLearningUK https://t.co/YWQRghkl4o
Retweeted from @BMATSTEM
Here is our third @JPFoundation recipient, Phillip. He has been an incredible addition to our Academy in Year 12. Well done Phillip! https://t.co/NLObLyKlWa
Retweeted from @RoydonPrimary
After a gruelling morning of matches the teams performed admirably. They showed great teamwork, individual skills and dedication. 🏑 The results are…4th place for year 5 and 2nd place for year 6. We are so proud of them all! Go team Roydon. 🏑 https://t.co/KpTlxLfvCQ
👋 Are you ready for BMAT? ✅ View our current vacancies on our website - https://t.co/GJjumrMOBP https://t.co/YL9nOINnu7
Retweeted from @RoydonPrimary
NSPCC Number day 2023! https://t.co/PrHTWXgwOT
Brilliant work from @BMATSTEM. Find out more about the curriculum offer for Years 10 - 13 at https://t.co/GUegqoV1Xt https://t.co/E8k0qSmQ2a
Retweeted from @BurntMillAcad
📢 CONSULTATION INVITATION 🦺 @DPPplanning are hosting a public consultation event for the proposed redevelopment of Burnt Mill Academy. 📅 Wednesday 8th February ⌚️4pm - 9pm 📍Burnt Mill Academy, First Avenue, Harlow CM20 2NR More details on https://t.co/AniifAYI7B https://t.co/TTFxzUGeVM
Retweeted from @BMATSTEM
Today we celebrated our latest @JPFoundation recipients, Baxter and Katie. They were recognised for their contributions both in and outside of school. Congratulations to both! https://t.co/axrviQvTgj