Five schools compete in Battle of the Bands 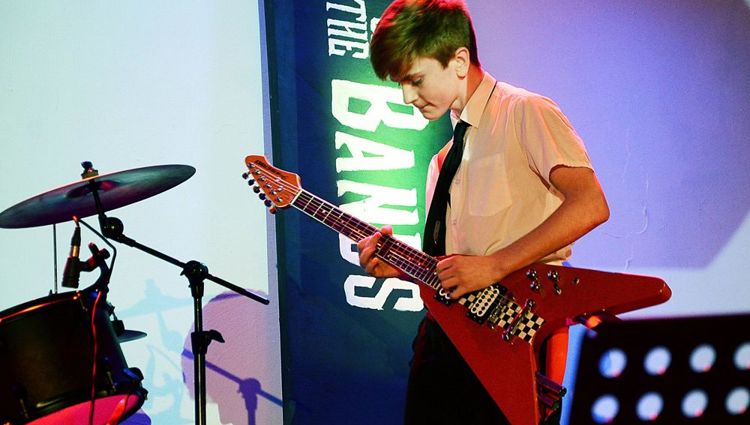 Posted on: Dec 5th 2019
Share this article
Email this page

Young musicians from five secondary schools went head to head in this year’s BMAT Battle of the Bands contest.

The evening event, hosted by Burnt Mill, saw 12 performances in front of a panel of judges, including a representative from Cosmic Audio in Epping.

The prize – taken this year by the overall winners, Year 10 Burnt Mill band Transmission – was a day in the recording studio at Cosmic Audio.

Joe Beckwith, Burnt Mill music teacher, said: “Lots of awards were given out on the evening, including for the best singer, best guitarist and best dressed band.

“The winners of the best band award, Transmission, were fantastic; they were really well rehearsed, had put in a lot of effort and know what they want. They have even started to write their own songs. They just love it. The four boys have taken part in school shows before and that has really helped them.

“The competition in the past has attracted mainly older students, so it was so nice to see our new school, Sir Frederick Gibberd, enter their Year 7 band. They received the bravery award. Off the back of the competition, they are now rehearsing every week.

“The standard was much higher this year and there was more of a variety of music. I think the younger students have looked up to those who have taken part in the past and that has influenced them to prepare and get involved.”

GCSE music students watched the show to meet part of the curriculum which encourages experiencing as much live music as possible.